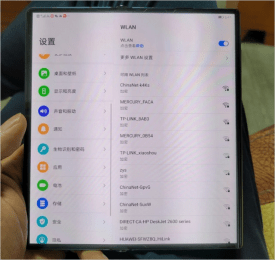 The Huawei Mate X2 with model number TET-AN00 / TET-AN10 appeared on the database of China’s TEENA certification authority. But the TEENA listing of the upcoming Mate X2 revealed nothing about its specifications.

A Chinese tipster did the honors of sharing the full specification of the Huawei Mate X2.

Several reports have hinted that the firm will replace the outward folding design for an inward folding mechanism on the Mate X2.

The leak confirms the claims of the previous reports. The tipster mentions that the Mate X2 would debut with an 8.01-inch inward folding display that delivers a resolution of 2480 x 220 pixels.

On the front, the Mate X2 has a secondary display that measures 6.45-inches. It offers the user a resolution of 2270 x 1160 pixels. It comes with a 16-megapixel front-facing snapper.

The upcoming foldable from Huawei would feature the Kirin 9000 flagship chipset. It will ship with the Android 10 OS and a 4,400mAh battery.