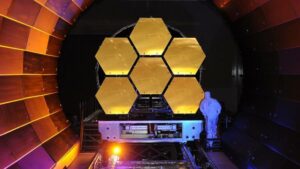 Webb is the largest and most powerful space telescope sent into orbit by NASA. It took the agencies involved about 25 years of development time, with costs amounting to $8.8 billion. Interestingly enough, this project started with a budget of just $500 million in 1996, with deployment expected around 2007.

However, multiple delays and a significant re-design resulted in rapidly ballooning costs. Engineers finally finished assembling the JWST in 2016. Afterward, it went through a rigorous testing phase before receiving the green light for launch preparations. You can revisit the entire broadcast of its launch in the video below.

JWST will spend its time traveling to an orbit called “Lagrange point,” over a million kilometers away from the Earth initially. Once it reaches that route, it will begin its unfolding phase, which would take around six months. After that, scientists back home would be able to study the space telescope’s findings.

The James Webb Space Telescope will help astronomers investigate distant exoplanets — planets that revolve around a different star — in other galaxies. Its remarkable capabilities promise to tell us more about the oldest stars in the universe and their formation. According to Webb Program Director Greg Robinson, the importance of JWST’s launch is on the same level as the Apollo missions, the space shuttle, the International Space Station, and the Hubble missions.

Due to Hubble’s popularity and the hype surrounding Webb’s launch, many compare these two complex instruments head-to-head. However, NASA doesn’t put them in the same bracket and considers the James Webb Space Telescope as the successor to Hubble Space Telescope (HST). This is because JWST is way more powerful than HST in nearly every aspect.

Talking about the area of operation, Webb’s orbit lies 1.5 million km away from Earth, unlike Hubble’s orbit, which is close by (570m away). From there, Webb is mainly meant to use infrared light to study heavenly objects. On the other hand, Hubble mostly uses optical and ultraviolet light for similar purposes.

A better reception for infrared light enables Webb to see further into space than Hubble ever could. This produces a golden opportunity for scientists to look at objects never seen before by humankind. These objects include the first planets and stars that formed in the universe.

JWST has a primary mirror, measuring up to 6.5 m in diameter, whereas HST’s primary mirror has a diameter of 2.4 m. This means JWST’s mirror can collect more light than HST’s mirror, and hence, the former can see way beyond what the latter does in space.

In essence, we can say Webb is 100 times more powerful than Hubble. This statement makes it clear just how important JWST is for astronomy and science in general.

Taking A Look Back In Time With Webb

Ever since the universe came into existence after the Big Bang, billions of years ago, it has expanded continuously. The oldest stars, exoplanets, and other heavenly bodies that were the first to be formed drift farther away with each passing moment.

This expansion that moves objects into space farther apart affects how easily space telescopes can see them in the cosmos. With increasing distance, the light emitted by ancient stars gets stretched and falls out of range for telescopes such as the Hubble. This stretched-out light (near-infrared) is what Webb would detect more immaculately than any of its predecessors.

Webb’s proficiency in analyzing near-infrared light would let us peer back in time and study the early universe. This translates to examining galaxies formed as early as 13.5 billion years ago. Furthermore, JWST would study planets in the solar system and compare them with exoplanets. It would also look for signs of habitability, such as water, on planets in other galaxies.

Overall, the James Webb Space Telescope would let us learn more about the universe and its secrets in a way that wasn’t possible before. You can keep track of Webb’s progress in space by visiting its YouTube channel.