Lexus has launched its first EV – the brand new RZ450e. As pointed by our readers, it’s not actually THE FIRST battery powered Lexus – that title goes to UX300e which shared the platform with Toyota C-HR and the platform had a designation GA-C. It was later adapted to electric powertrain and that’s how UX300e became the first battery powered Lexus back in 2019. The RZ450e is the first electric Lexus built on a dedicated EV platform – designed from the beginning as a battery powered vehicle, without the option for fuel powered engines. It is the first vehicle in what is called “Lexus Electrified Vision” – the plan to have a full lineup of electric Lexuses and going 100 percent electric by 2035. Although based on the same platform as Toyota and Subaru, Lexus is trying really hard to stand out – and it shows.

The front of the Lexus RZ450e greets us with the usual Lexus trapezoidal design, no longer a grille since there’s no need for cooling, the lights are way different than on the Toyota or Subaru, the whole front is let’s say – assertive? The launch model we have seen in the video was in single color but the RZ 450e will also be available in dual-tone with black bonnet and the middle part of the front bumper.

The sides carry a lot of black as well, the mirrors, the pillars and Lexus decided to replace the rear side glass with black panels to visually join the roof with the rest of the body. The exterior design is nicely finished with the rear that carries a different spoiler than Toyota or Subaru, full width LED lights that stretch onto the sides with Lexus name in chrome sitting proudly just below the middle brake light. 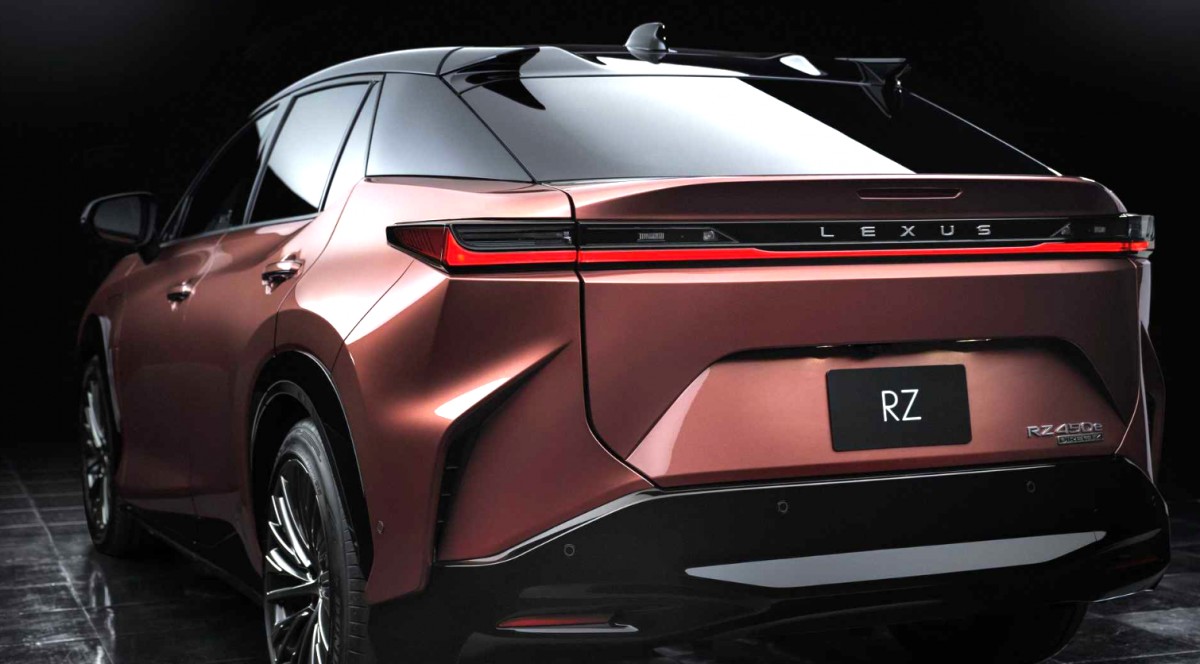 The most controversial bit about the interior is the yoke steering. The car will also be available with standard steering wheel, so Lexus will give us a choice here.

The big difference here between RZ and its siblings, is the positioning of the instruments and the size of the main screen. The instrument cluster sits really close to the driver unlike in Toyota when it’s pushed much further back. The central screen is a 14” affair so quite a bit larger as well, with a rotating drive selector sitting in the middle console next to large cup holders. The start button has a prominent position sitting just above the left corner of the central screen.

The interior is classy as can be expected of Lexus, seats look quite sporty with high sides that should support the passengers well during a spirited drive. The center console is deep, sitting almost at the elbow height and making the driver feel cocooned. Combine that with the yoke steering and you may be excused for thinking you are piloting a Formula E car.

The glass roof adds to that feeling, it runs the full length of the car and is split into two parts. The party trick is the privacy glass – with a switch of a button the glass roof goes opaque making sure no birds or bugs can judge your driving. It will help with reflecting heat as well, we are pretty sure of it.

There is a wireless phone charger under the main screen as well as two USB-C charging ports. Two more charging ports are available for the passengers in the rear. 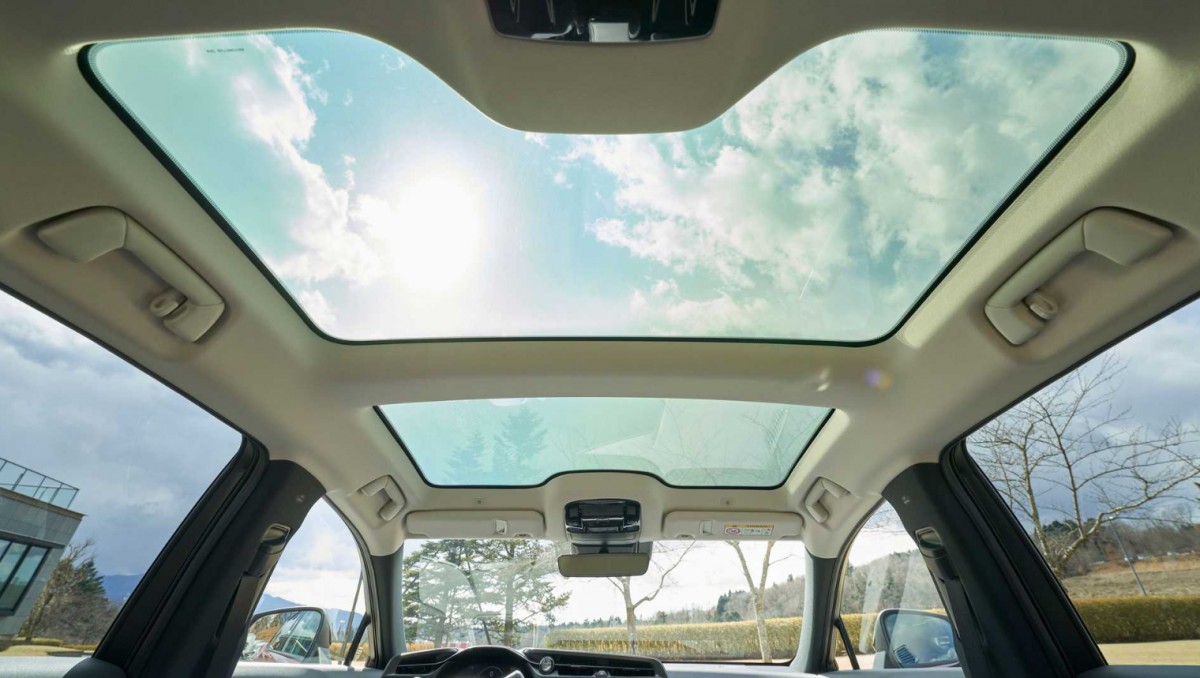 Let’s talk about power! Lexus RZ 450e comes in a single all-wheel-drive platform called Direct4. Luckily Lexus chose to put more power into the RZ giving us a combined 308hp (230kW) – that’s nearly 100hp more than Toyota and it’s a welcome boost. Interestingly though, the power hike comes from the front motor, which has 150kW output compared to 80kW for the rear one which suggests front wheel bias when it comes to driving characteristics.

The torque gets a bump to the very healthy 435Nm, this car will be a hoot to drive. The battery pack is the same as in Toyota and Subaru – 71.4kWh and according to Lexus is good enough for 362km (225 miles) but only if you go for 18” wheels, Lexus is keeping quiet on the numbers for the larger wheels which come standard with higher spec cars. We don’t know the pricing yet but looking at Toyota prices and then comparing them to the equipment level and some historical price differences, we can’t see the entry model RZ 450e starting below $50,000. 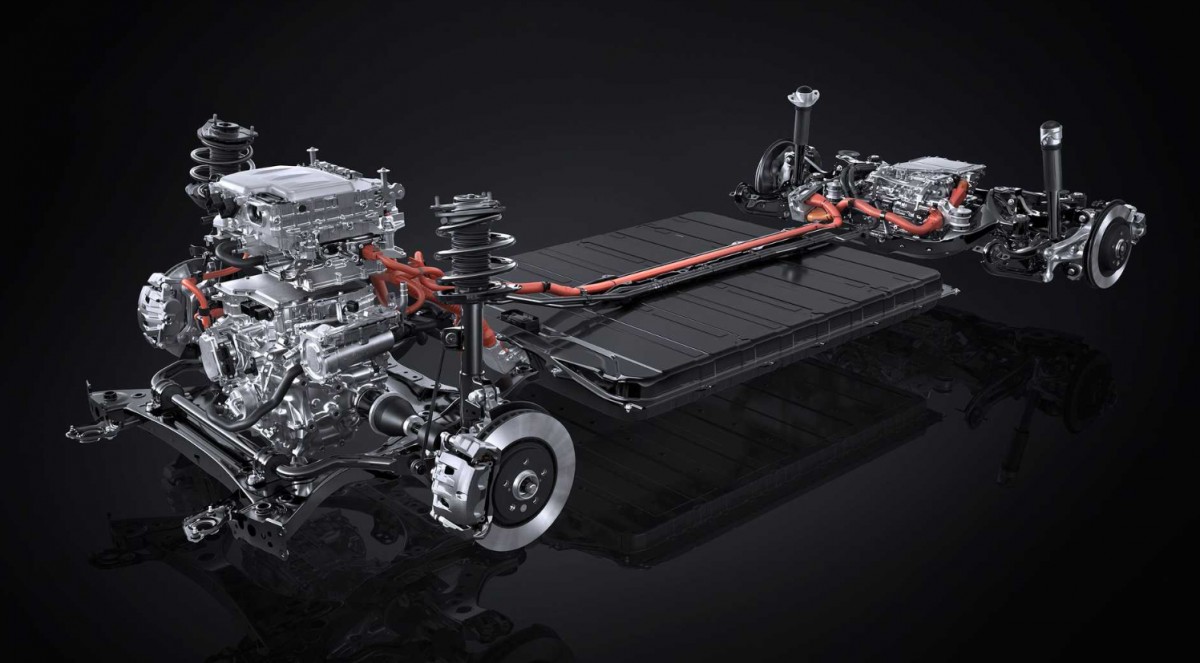 At the event Lexus also shared a beautiful video with some interesting details about the electrification plans for the brand. One noteworthy bit is that Lexus is planning to announce another EV, this time inspired by the classic LFA and it may happen as soon as this summer. Performance Lexus EV? Summer can’t come soon enough then.

Until the summer comes, you can enjoy some more photos of the RZ 450e and the upcoming coupe here: