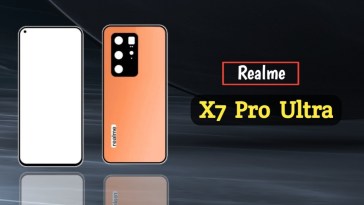 Reports have it that the Realme X7 Pro will feature the same Dimensity 1000+ chipset in the Redmi K30 Pro. While reports are still shelling out information on the X7 and X7 Pro smartphones, a fresh leak has mentioned that the tech giant is working on a premium edition of the Realme X7.

The premium model is called Realme X7 Pro Ultra. It is a 5G-ready device, and it reportedly weighs 175 grams.

A reputable source has shared images and key specifications of the upcoming Realme X7 Pro Ultra. The leak claims that the device would debut alongside the X7 and X7 Pro on September 1.

It is said that this premium device would come with an S-AMOLED display. The screen would feature curved edges and a punch-hole design. It supports a 120Hz refresh rate, and there’s a high chance the fingerprint scanner is integrated under the screen.

On the phone’s rear, a 64-megapixel led quad-camera system sits graciously. The leaked image of the phones suggests that it would feature a periscopic zoom lens in its secondary camera system.

Being a new phone, it will come pre-installed with the latest Android 10 Operating System. The Realme X7 Pro Ultra will arrive with a 4,500mAh battery. It will carry support for 125W super flash charging technology.