Infinix unveiled the Infinix Smart 4 Plus smartphone in July . Traditionally, the ‘Plus’ added to the device name means it’s a higher variant.

At the time of launch, the company was yet to launch any device with the Infinix Smart 4 moniker.

However, the Smart 4 Plus did come with some pretty attractive features such as the Helio A25 chipset, a massive 6.82-inch display, and a 6,000mAh battery. 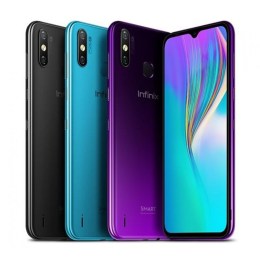 After many months, Infinix took to India today to announce the Infinix Smart 4. It arrived as a weaker sibling of the earlier announced Smart 4 Plus.

On the inside, the mid-range Helio A22 chipset drives the Infinix Smart 4. It comes with 2GB of RAM and an internal storage space of 32GB. For storage expansion, the smartphone offers the user with a MicroSD card slot.

The Infinix Smart 4 features an 8-megapixel selfie shooter in its on-screen notch. A dual-camera system comprising of a 13-megapixel primary sensor and a depth sensor sits on the phone’s back panel.

The Infinix Smart 4 comes pre-installed with the XOS 6.2 Dolphin UI based on the Go edition of the Android 10 OS.

For security, it has a rear-mounted fingerprint scanner. The Smart 4 is backed up by a 6,000mAh battery that supports only 10W charging.

The Infinix Smart 4 will be hitting retail stores in colour editions like violet, ocean wave, quetzal cyan, and midnight black.